Nancy Pelosi to step down as Democratic Party leader 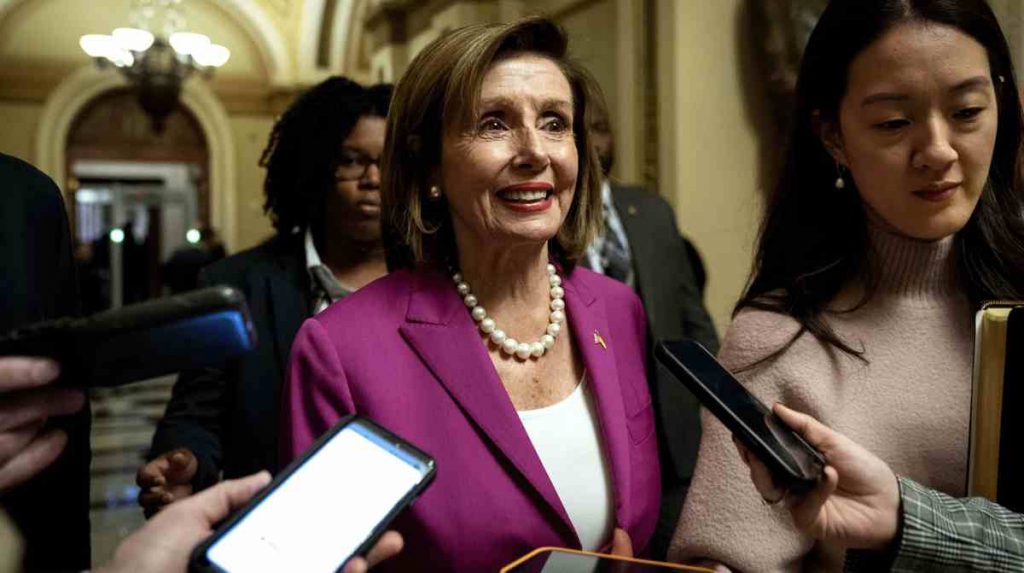 Nancy Pelosi has said she intends to stay in Congress, but will not run for the Democratic leadership again as her party prepares for Republican control of the House in the next term.

After 20 years as Democratic leader, Nancy Pelosi is stepping down from party leadership after this term, she said in a speech on the House floor Thursday. But she will remain in Congress: "With great confidence in our caucus, I will not seek re-election as Democratic leader in the next Congress. To me, the time has come for a new generation to lead the Democratic caucus that I so deeply respect, and I am grateful that so many people are ready and willing to take on this enormous responsibility."

It's not entirely surprising that Nancy Pelosi is stepping down; she agreed to a term limit in 2018 when she negotiated another term as Speaker. But over the past year, it has been less clear whether the legendary leader would abdicate her position for good.

In October, her spokesperson told that she was on a "mission" to protect the majority, not "change". In an emotional interview with CNN this month, she said the violent assault on her husband, Paul, would play a role in her decision. After Democrats outperformed expectations in the House, Pelosi said members of her caucus asked her to "consider" running for the leadership again. The Democrats still lost the majority, but only just.

On Thursday, in a speech that historian Jon Meacham reportedly helped craft, Nancy Pelosi recalled her journey from her first visit to Capitol Hill at the age of six, thanks to her elected father Thomas D'Alesandro Jr – he represented Maryland's 3rd district – to her leadership of the House under several presidents and the passage of major legislation, from the Affordable Care Act to the environmental provisions of the Inflation Reduction Act. "When I first came to the House at the age of six, I never thought that one day I would go from housewife to Speaker of the House," she said.

Representative Hakeem Jeffries of New York, who currently chairs the House Democratic Caucus, has long been considered the heir apparent to Pelosi. Representative Adam Schiff of California, who had himself considered running for president, is now reportedly considering a Senate seat. "Adam had really enjoyed talking with his colleagues in the House leadership, but the overwhelming urge and sense of purpose and service drove him to run for the Senate," said a source familiar with his plans.

Representative Katherine Clark of Massachusetts, currently the deputy House Democratic leader, has a good reputation in the Democratic caucus and is rumoured to be Jeffries' number two if he takes the top job. Pramila Jayapal, head of the Congressional Progressive Caucus, has also expressed interest in the role. As recently as Wednesday, Jayapal did not rule out the possibility: "It's a question of when and where I can have the most impact," the Washington representative said.

In addition, speculation has swirled about the plans of Nancy Pelosi's two top lieutenants – House Majority Leader Steny Hoyer, 83, and House Majority Leader Jim Clyburn, 82. But shortly after Pelosi's speech, Hoyer issued a statement saying he would not seek another leadership position either: 'I believe it is time for me to continue my service in a different role. Therefore, I have decided not to seek an elected leadership position at the 118th Congress," although he will remain a member. Mr Hoyer's decision certainly makes the upcoming leadership fight less messy.

Clyburn, too, announced his intention to withdraw from the leadership race and offered a cast for potential future Democratic leaders: "Speaker Pelosi has left an indelible mark on Congress and the country, and I look forward to her continued service and to doing all I can to help our next generation of Democratic leaders who I hope will be Hakeem Jeffries, Katherine Clark and Pete Aguilar," he said in a statement.

A new day is dawning on the horizon

Elected officials Madeleine Dean, Joyce Beatty, Debbie Dingell and Ted Lieu have set their sights on the vice-presidential position. Aguilar is considered a leading candidate for another leadership position, and Rep. Joe Neguse has indicated his desire to replace Jeffries as caucus chair. And after Rep. Sean Patrick Maloney of New York lost his bid for re-election last week, two Democrats – Representatives Ami Bera and Tony Cándry – have stepped forward to replace him as chair of the House Democratic Congressional Campaign Committee.

"A new day is dawning on the horizon, and I look forward, always forward, to the unfolding of our nation's story, a story of light and love, patriotism and progress, of many becoming one and always an unfinished mission to make today's dreams tomorrow's reality," concluded Nancy Pelosi.