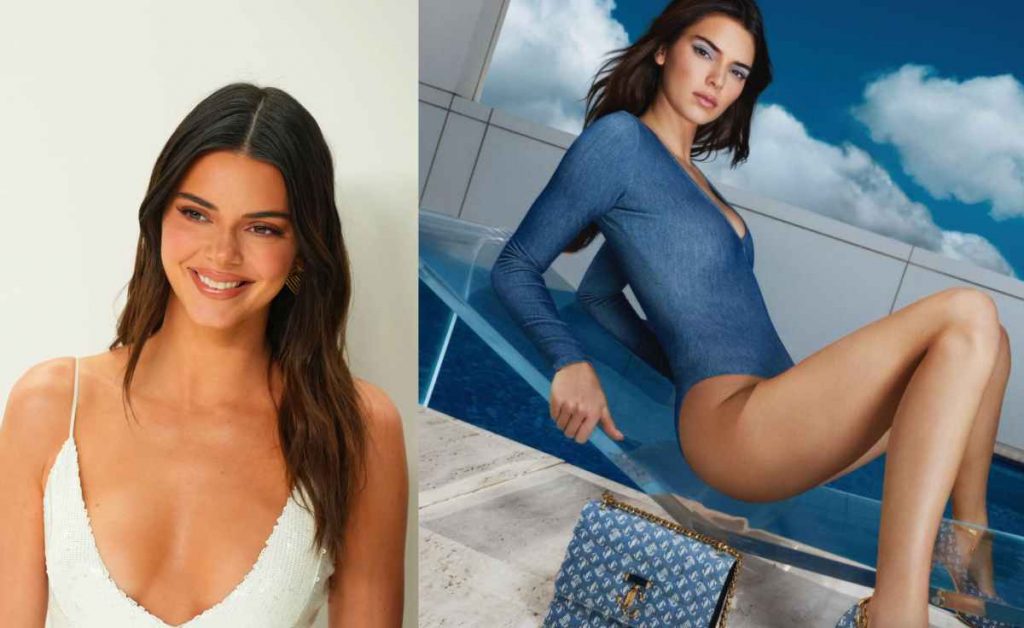 This trend that Kendall Jenner is bringing back is bound to look familiar: blue eyeshadow. And it looks better than ever!

Beauty trends are like a boomerang, they may disappear for a while, but they always come back. This winter, a trend we know from the 70s is coming back – blue eyeshadow. Model Kendall Jenner now proves how modern and elegant the look can be in a new campaign by luxury brand Jimmy Choo. With a jeans-look bodysuit, blue patterned shoes and matching bag, a matt light blue shines on the model's eyes to compete with the colour-matching sky.

Responsible for the on-trend make-up is Kendall's trusted make-up artist, Mary Phillips. To put the full focus on the eyes, Phillips opted for a subtle base with an even complexion and some bronzer. Lips and cheeks were given a fresh touch in a peachy pink, while Kendall's pout was accentuated with a touch of gloss. The make-up artist also kept it simple for the eyes: matt eye shadow in a light blue, which she applied to the entire moving lid and blended outwards to under the dark eyebrows, as well as a slightly greyer blue shade, which she used to emphasise the lower lash line. Then just a touch of mascara for the upper lashes and you have the perfect winter look!

Blue eyeshadow allows you to wear less make-up, but with more interesting accents. This combination of natural makeup and colour accent is one of the reasons why blue eyeshadow will soon be seen everywhere again. "In the beauty scene, there is definitely a desire to wear less make-up but have more interesting colour choices. That's why fresh colours are always more sought after than heavily shaded neutral tones," says Terry Barber, Director of Make-up Artistry at Mac Cosmetics. "Blue eyeshadow is one of those shades that's having a renaissance, and it's being reinvented as something flattering and chic instead of the kitschy, clownish image it may have had in the past."

Whether it's a matte blue eyeshadow or a liquid blue disco eyeshadow, the world of blue eyeshadow has something for everyone. Make-up artist Neil Young told VOGUE that he loves this shade because it is "the perfect opposite to black, yet defines the eye, makes any eye colour pop and goes with any skin tone". He added that it can be worn graphic and bold as well as in place of a traditional black eyeliner.

Here's what to look for in blue eyeshadow

How to pull off the look? Barber believes the key is to create a simple look rather than something too "textured" or overly technical: "This leads to an instant retro 80s look when blue is involved," he says. "It's also important not to use colour elsewhere when using blue on the eyes, as it can look garish or doll-like," he says, recommending pairing the ultimate 70s look with tanned cheeks, fresh nude lips or clear gloss and multiple layers of mascara – the look Kendall Jenner also opted for.

When it comes to choosing colour, go for eyeshadows with a soft, shimmery finish and with a rather light pigmentation (these go with all skin tones and eye colours). While bold shades like cobalt are great for eye-catching red carpet looks, Barber is more of a fan of soft, glamorous shades like dove egg, bluebell, wedgewood and teal for eyes or light day make-up or those who prefer minimalist.