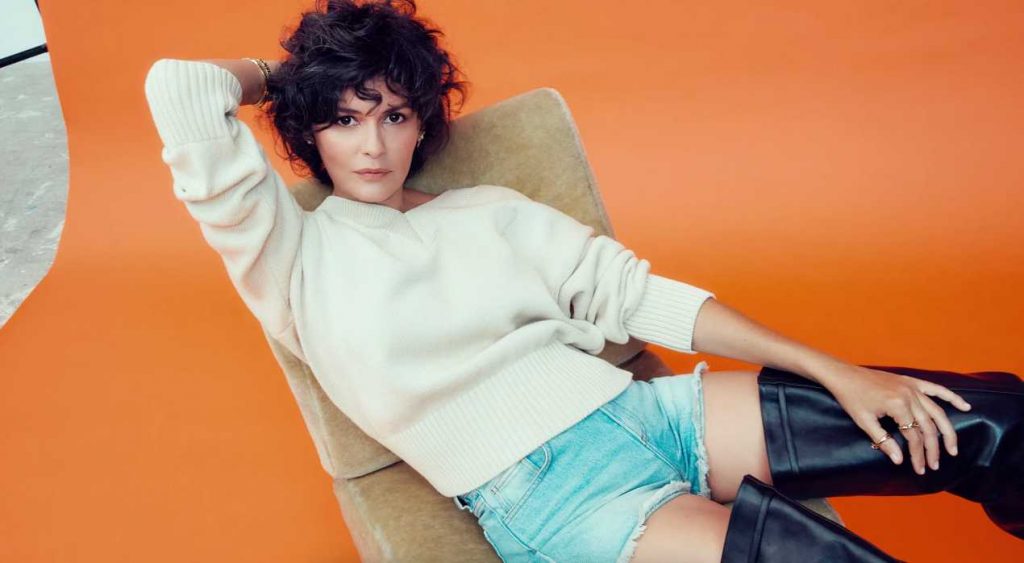 When she walked the runway for AMI at Fashion Week in June, everyone wondered if Audrey Tautou was finally back. In an exclusive interview, she explains what made her disappear, and why her desire for cinema is still intact. But not necessarily in front of the camera.

Audrey Tautou has such a reputation for running away from her notoriety that you almost feel like apologising for being there. I knew what was being said: she had disappeared from the world of cinema, refused all roles, had withdrawn from view. And I wondered about her reasons: tired of being reduced to the iconic candour of Amélie Poulain? Bored with an environment that no longer amused her? It is also whispered that, secretive and fragile, broken by the paparazzi, she could no longer bear to be recognised in the street. In short, the price of success. A star's burn-out.

Yet there she is, curly hair, posing in the spotlight in shorts and waders, as frail as she was twenty years ago. "An elf", as the director Jean-Pierre Jeunet, who gave her international acclaim thanks to The Fabulous Destiny of Amélie Poulain (2001), puts it nicely. She jokes with the photographer, sits down, straightens up, lifts her chin, smiles when necessary, it doesn't seem to weigh on her. She goes to change, walks on her 12 centimetre heels in front of the return screen, sees her image: "You look like Dani", she says playfully, before throwing a sparkling glance towards the team of AMI, the brand that dresses her today and put her back in the spotlight on 23 June. It was the first fashion show of her life. And now, in two minutes, at the end of the photo session, it will be her first long interview since… how long, by the way? What are we going to celebrate with her, a real return to the limelight or a flash appearance?

As I wait for her in the heat of this late summer, on the terrace of the photo studio, I recall the praise delivered by the directors who have played her. "She is lucid, autonomous, precise, witty, a beast of a set", Pierre Salvadori assures me, who has directed her in three films – you must see En liberté (2018), in which the actress takes on a small, subtle and moving role, one of her last. "She asks few questions but they are always relevant, she is extremely intelligent," adds David Foenkinos, who gave her the lead role in La Délicatesse (2011). "She can be funny, tragic, technical, she knows how to do everything," adds Jean-Pierre Jeunet. Everyone praises her "extraordinary" talent, dreams of getting her back into the cinema, and finds it hard to understand why she keeps declining offers. "Good luck finding your way through Audrey's labyrinth," Pierre Salvadori told me in conclusion.

Finally, no, Audrey Tautou is not Garbo. She arrives with a smile on her face, very simple, direct, articulate, exquisitely polite, and whispers with a laugh that her words are not "going to change the world". When I ask her why she has given up cinema, she corrects: "I never said I was quitting, I will never say that because it's not the truth. You never stop being an actress." She adds: "I love shooting, I love the atmosphere of a film, I have never been disappointed or mistreated, on the contrary. I've been very spoiled in this profession. Really? I must have a round eye, because she insists: "Honestly, I've always been very happy. That's not a lie."