EmergeSocial.net News A Saint Laurent fashion show as a total (and ecological) work of art 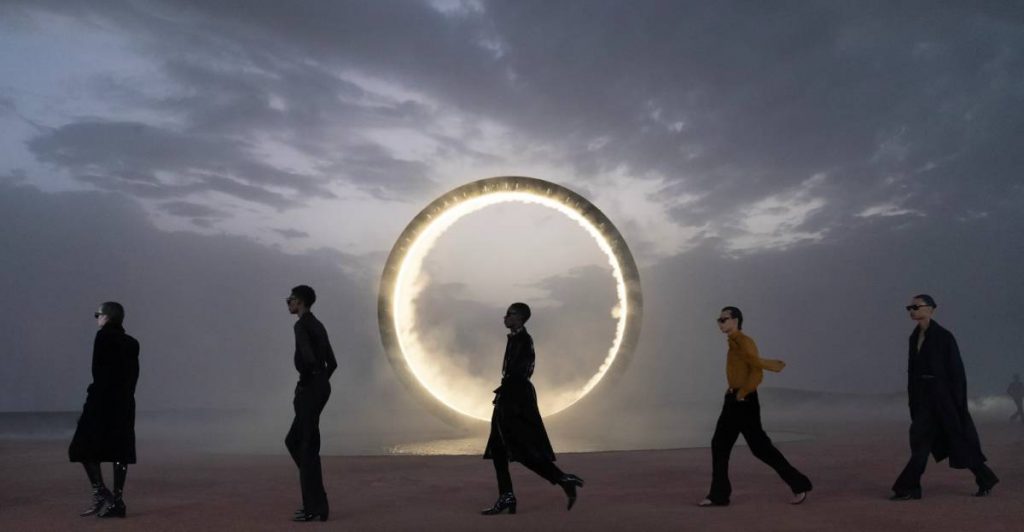 In the Moroccan desert, Anthony Vaccarello orchestrates an astonishing parade of the men's collection, with a raw poetry that affirms his responsible commitments by partnering with several local NGOs.

Between Saint Laurent and Morocco, the story goes back a long way. 1966, more exactly, the year when Yves Saint Laurent discovered Marrakech, its beauty and this special light that bathes the ocher city. But it is also in the work of the writer Paul Bowles (1910-1999), who spent most of his life in the Cherifian kingdom, that Anthony Vaccarello immersed himself, more particularly in his novel Un thé in the Sahara (1949), where this great literary figure writes: “We think of life as an inexhaustible well. Yet everything happens a certain number of times, and a very small number in fact. How many times will you remember a certain afternoon in your childhood that is so much a part of you that you don't want to conceive of your life without it? Maybe four or five more times. How many times do you still watch the full moon rise? Maybe twenty times. And yet, it all seems limitless.”

A minimalist oasis in the Moroccan desert

This idea of ​​infinity was translated into a decor designed as a total work of art, installed in the desert. Catherine Deneuve, Béatrice Dalle, Dominic Fike, Paul Hameline or even Mark Tuan discover in the sand dunes of Agafay the historic logo designed by Cassandre, illuminated by the setting sun as if it were cast in gold. Further on, a huge installation by London artist Es Devlin, like a strange oasis emerging from nothing and brought back to basics: a disc of water from which emerges, during the parade, a spectacular ring of light. It is in this fantastic setting, evoking both American land art and a science fiction film set, that Anthony Vaccarello presents a season that is obviously very Saint Laurent, from the tuxedo again reworked to stretched silhouettes, the waists marked in height, the coats cut with a scalpel and these flared pants that made with the sand. Androgyny is of course at the rendezvous of this show where black Saint Laurent reigns supreme on a background of beige sand.

In line with fashion show decors intended to be responsible, the House pushes the cursor a little further. By marching outside the official calendar, and therefore not being able to take advantage of the press, influencers and buyers present at Paris Fashion Week, it is essential for her to make an impression – something that this show like no other has undeniably successful. But at a time when environmental awareness is sharper each season, Saint Laurent has deployed a major system aimed at limiting the footprint of the event as much as possible, starting with the consultation of local experts in flora and fauna. , especially reptiles and birds. Along the paths traveled to take the guests to the place of the parade, specific systems of pipes have been put in place to allow the animals, particularly those in humid environments, to shelter. The water used, which is not drinkable, will then be used for irrigation projects in the Agafay desert.

An orchard, a well and an educational garden

The seats and the tents of the parade have been ordered from artisans in Marrakech, who will also be able to recover certain materials that can be upcycled into carpets but also for local construction projects. Saint Laurent also partners with several organizations, including Amal (an NGO that trains women in the arts of cooking and tableware), and the Haut Atlas Foundation. Through this, the house will defend a development project for an orchard of several thousand fruit trees in the village of Achbarou, the installation of a well, a water storage system and of solar panels in the village of Akrich. An educational component is also associated via the Moroccan Biodiversity and Livelihoods Association, which aims to install an educational garden for 400 children in the rural town of Zerkten.