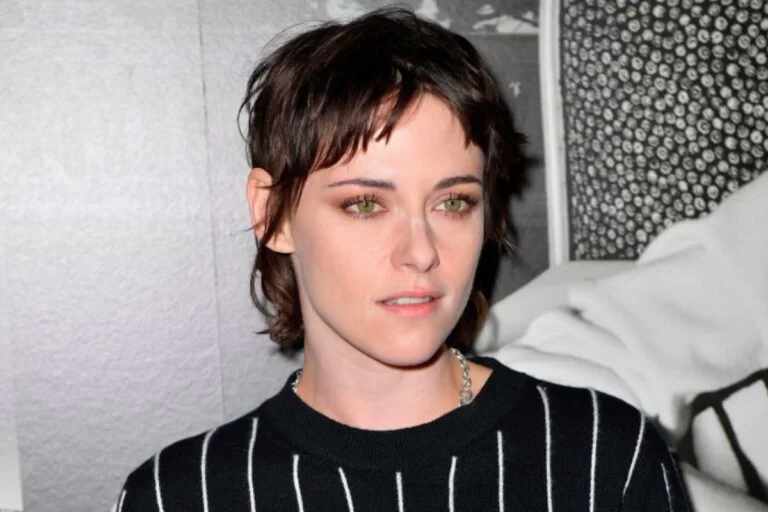 It's Chanel Day at Paris Fashion Week. In the front row, Kristen Stewart, steals the show, with an unexpected new haircut, paraded Eighties chic. As gritty as the focus of the beauty looks staged on the runway, to accompany the cinema-inspired collection of yesteryear: magnetic burgundy lips, glamorous and alluring, contrasting with moonlit complexions.

Changing haircut and also hair color one of the muses of the Parisian fashion house: Kristen Stewart, abandoned the versatile mid-length blonde with contrasting roots, now sports a mullet with an eighties flavor enhanced by a very dark and intense brown.

On the other hand, the actress has always been accustomed to her changes of look and now she chooses one of the most transgressive cuts.

Coming straight back from the late seventies and early eighties, the mullet has always had the great advantage of versatility: short in front and longer at the back, always combined with a fringe that in the actress' case is scaled, shorter in the middle of the forehead and longer on the sides.

A cut not suitable for everyone, it is ideal on rectangular or diamond-shaped faces, the actress wears it following the spirit of the time: slightly disheveled and "easy," crumpled.

On the runway instead, Chanel focuses on elegant dark lips, alternating with nude mouths. With an almost vinyl look – in the center, in fact, they are slightly shinier – they are created with an intense, almost black, femme fatale burgundy.

Originating in Gothic and Victorian iconography, today dark lipsticks are extremely elegant but must be applied with due care: no peeling or drying on the lips, which must be perfectly nourished. And a proper play of contrasts between the lips and the skin, perfectly balanced so that it is not too vampire-like, indeed, chic.

In contrast to the darkness of the lips, the skin and therefore the base makeup remains very clear, almost diaphanous, barely sculpted by a very light sweep of blush to draw in the cheekbones. And the brow arch gives the rest, perfectly drawn, dark and thick. As Kristen also teaches.