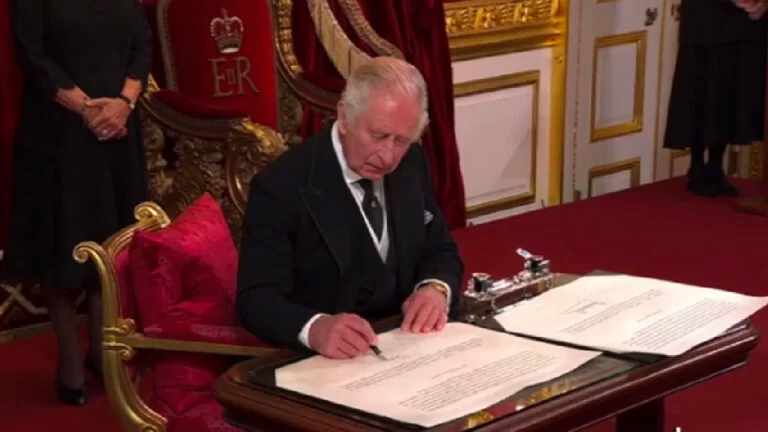 A truly historic moment for the Royal Family. After 73 years as prince, the newly crowned King Charles is officially proclaimed in a ceremony broadcast live on television for the first time. And following the example of his mother, Queen Elizabeth, he vows to forever serve his subjects.

Charles III appeared visibly emotional during the proclamation ceremony that took place this morning at St. James's Palace, before the Accession Council, an ancient body made up of two hundred politicians, judges, and other dignitaries at the head of British institutions. Also by his side were his wife Camilla and son William.

During the traditional, ancient and elaborate ceremony that had not been held since Elizabeth's ascension to the throne in 1952, Charles made a personal statement again paying tribute to his mother: "Her reign was unrivaled in its durability, commitment and devotion."

The new king then took his oath of office, noting his mother Queen's responsibilities, following her example and solemnly promising to ensure "the peace, harmony and prosperity of the citizens of these islands and the territories of the Commonwealth." And he did not forget Camilla, saying he was "encouraged by the continued support of his beloved wife."

The proclamation was then signed by Charles, Queen Consort Camilla, and William, the new Prince of Wales, who must surely have been thinking about when his ceremonial star turn will come in what will be his ascension to the throne. With them were Premier Liz Truss and other dignitaries, including the Archbishop of Canterbury, Justin Welby, and several other former prime ministers, including Boris Johnson and Tony Blair.

Charles as progressive as his father Philip

It was Charles himself who decided to welcome cameras into the Accession Council for the first time. The new king desires transparency, sources at court say, and he wanted his subjects to be present in a ceremony that did not disappoint, proving once again that the British are unbeatable in traditions and ceremonies conducted with pomp and circumstance. The new king thus followed the example of his father Philip who, in 1953, had insisted on having Elizabeth's Coronation broadcast live.

And when the Garter of Arms-the Garter of Arms who always precedes the sovereign in heraldic ceremonies-came out on the balcony of St. James's Palace to proclaim the new king, Charles III, the crowd launched into an enthusiastic "hi hip hooray," then sang in chorus the national anthem now changed to God Save The King.