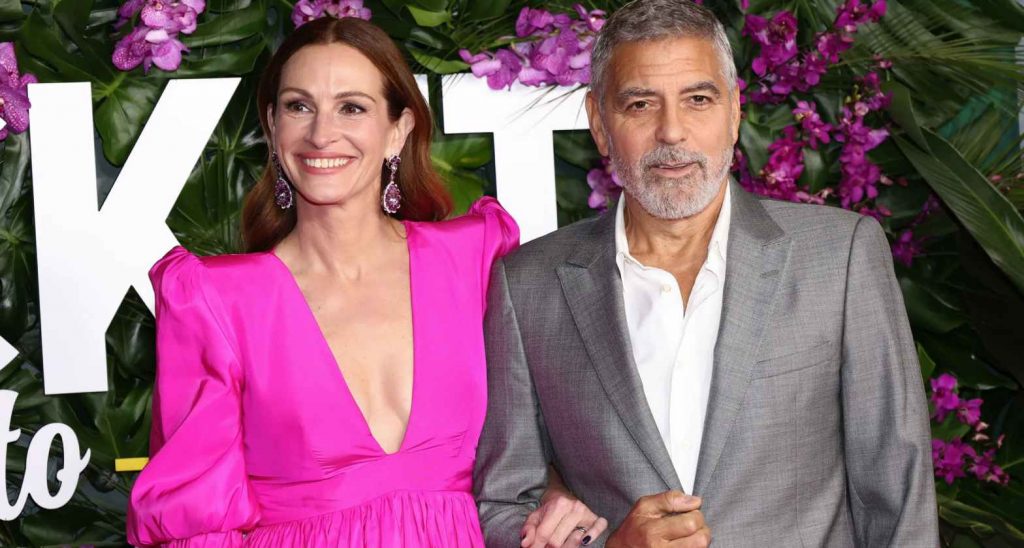 The actress attended the Washington event, where the actor's life and work were being celebrated on Sunday night, wearing a bespoke black taffeta dress by Moschino covered in a print of tiny framed portraits of the ER star taken over his long career. The star's stylist, Elizabeth Stewart, shared a photo on Instagram of her client in the look from behind, showing off the entire gallery of George Clooney images printed on the dress' skirt and thanking the brand's creative director, Jeremy Scott, for helping bring the concept to life with the hashtag "#juliaframedgeorge".

Elizabeth Stewart completed the actress' look for the evening with a cropped black blazer, also by Moschino, and Chopard earrings.

Never a couple, despite their chemistry

Julia Roberts and George Clooney have played love interests many times during their 20-year friendship, starring in films such as Ocean's Eleven, Ocean's Twelve, Confessions of a Dangerous Man, Money Monster and, most recently, Ticket to Paradise. In an interview to promote the film, they were asked why they had never been a couple despite their on-screen chemistry, to which the actress replied, "I don't think we need to say that!" George Clooney explained why they never felt the need to take their relationship to "another level": "Julia was always in a relationship, or me in a relationship. And we became very close friends right away. But it was just fun for us. I don't think it was ever really about."

George Clooney wasn't the only star being celebrated at the Kennedy Center this weekend. The event also honoured Amy Grant, Gladys Knight, composer and conductor Tania León, and U2. The actor walked the red carpet with his wife, Amal Clooney, and his parents Nick and Nina.