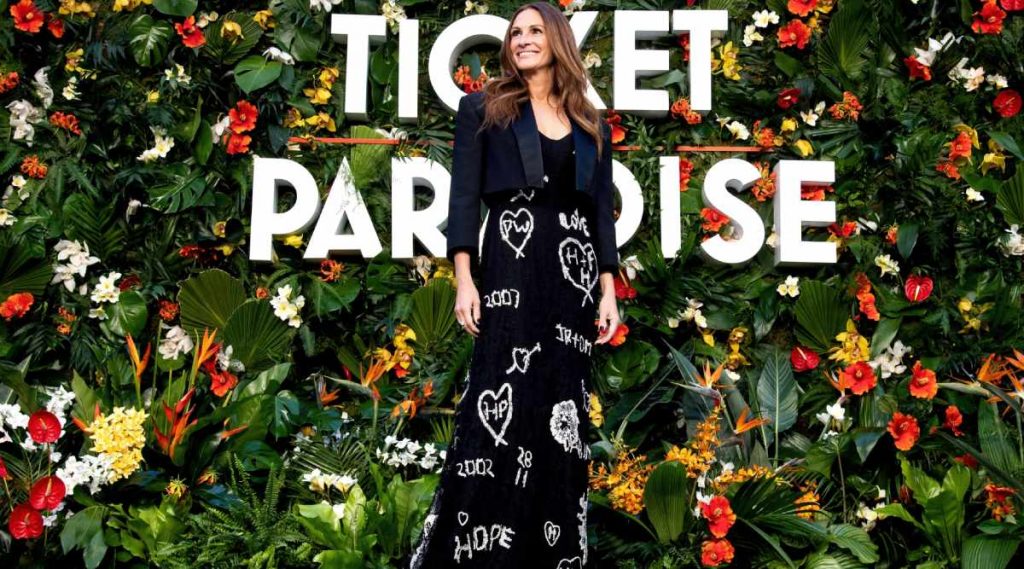 Julia Roberts, on the London red carpet at the world premiere of Ticket to Paradise, sported a custom-created Alexander McQueen designer long dress studded with initials, dates and patterns with special meaning.

Hearts, letters, dates. No rebuses to guess or fancy embroidery stitched at random. Every symbol on that dress, an Alexander McQueen in black Chantilly lace sported at the world premiere of Ticket to Paradise-the Ol Parker film starring her opposite George Clooney-has a specific meaning for Julia Roberts.

Starting with the inscription "JR + DM," none other than the pairing of her and husband Danny Moder's initials. A romantic gesture, amplified by a sequined "2002," which is the year of their marriage. Also glimpsed between folds of the long dress are the initials of their children's names: Hazel, Phinnaeus and Henry, and then cascades of hearts, flowers and other symbolic dates that have marked the life of the famous actress. A true trail of love sewn on.

An undoubtedly romantic creation the one sported by the actress on the London red carpet. And especially precious since the motifs, created with silver bullion, metal threads, beads and sequins are all hand-embroidered by Sarah Burton's team. "We were inspired by Sarah's crystal motifs seen on the runway," Elizabeth Stewart, Julia's longtime personal stylist, told Vogue UK, explaining the special commission.

Completing the look was a micro wool tuxedo jacket. And then the brightest accessory, her unparalleled smile.