EmergeSocial.net News Jessica Brown Findlay: ‘After Lady Sybil I am a wild mother’

Jessica Brown Findlay: ‘After Lady Sybil I am a wild mother’ 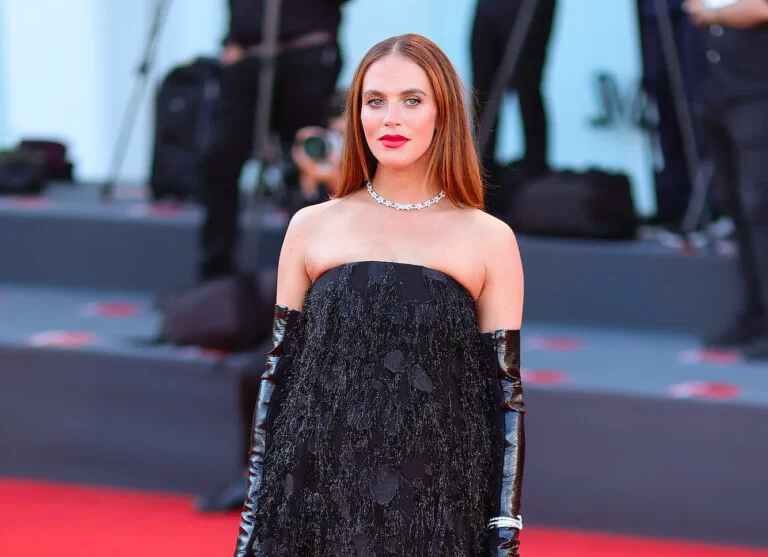 The best-loved star of 'Downton Abbey' returns with 'The Hanging Sun', a thriller based on Jo Nesbø in which she reveals a surprising face. And here she tells her story, from her broken dream to her success, from her eating disorders to her motto: 'Be kind'.

Lady Sybil (Jessica Brown Findlay) is alive, and fighting along with us. Only she has changed her skin: she is no longer the sensitive daughter of the Earl of Grantham, the idealist who in Downton Abbey marries the chauffer (and dies giving birth to a baby girl, a record-breaking episode). In The Hanging Sun-Midnight Sun, the thriller directed by Francesco Carrozzini and based on the book by Jo Nesbø (from 12 December exclusively on Sky Cinema and Now), she is Lea and lives with her son in a village in the middle of nowhere in Norway, a victim of her religious fanatic father and brother-in-law. But an encounter with a fugitive (Alessandro Borghi) who – like her – hides a secret triggers a compelling story.

"I loved her being wild and free and exposed. I didn't want make-up or a hairdresser," she says.

Impatience with costume dramas? Is that why she left Downton Abbey, forcing the author, Julian Fellowes, to 'eliminate' her?
No no, I love them! I grew up reading Jane Austen. Actually, in 2010, acting was my second job, I was still at art school: when we weren't filming, I invariably had traces of paint in my hair (laughs). We all had a three-year contract, and when I was asked to renew it, I wasn't ready, however financially it would have fixed me. I wasn't even sure if I would continue being an actress. That was not my dream.

And what was that?
To be a dancer. A thunderbolt – I must have been two and a half years old – when a little girl entered kindergarten wearing a tutu. I overcame my mother's reluctance and she enrolled me in a class. I was so in love with music, with dance: I felt freer in that space than in talking to people. It was the first time I was good at something I loved (I was terrible at school, although I tried really hard). I had no money, but my teacher helped me find scholarships. I even performed at the Royal Opera House.

Then what happened?
I had surgery on my ankles, just as I was about to join a company. I said to myself: 'OK, closed'. It's strange, at that moment I didn't feel brave or powerful. I simply knew that stopping to cry would kill me because my identity went through there: I felt "Jessica, dancer", almost like it was my surname, I couldn't separate the two. And around 2005 I ended up at Central Saint Martins College of Arts and Design: London was creative and chaotic, and it was so exciting, for the first time in my life, to be surrounded by people who had never taken a ballet class!

Suddenly I was with people who explored every avenue for their art, and didn't mind turning it into a job. They made me laugh, they were kind and original. It was like taking LSD, everything was in technicolour and suddenly it made sense! It unlocked something in me, it pushed me to find new ways of expressing myself So came acting.

Do you tend to see the positive side in everything?
Yes, I consider myself very optimistic. When you are young you just act on instinct, and my instinct was to move forward. Every change in my life has not been intentional or planned, sometimes even frightening, but it has taught me to get rid of plans that do not work and that is exciting. It does not mean not having hopes, ambitions or dreams, but embracing new things, although this attitude does not come naturally to me, on the contrary.

How did you 'work' on your inner balance?
With psychoanalysis. There's this idea that – to be an artist – you shouldn't have to heal the cracks you feel in yourself because that's where your creativity springs from. Instead, I think it's crucial to be kind to yourself. So I would say therapy, good food, unconditional love and just a bit of relativising the important things. I do yoga: I love it, it makes me happy. My husband (actor Ziggy Heath, ed) and I are often at the cooker: at some point, every day, we are in the kitchen, we sit, we chat, we eat well. There have been times when I have been uncaring of myself, and I have ruined everything.

The recovery of Jessica Brown Findlay

What are you alluding to?
I suffered from eating disorders. Food is something you control, but it is essential for life, you can't just eliminate it like a drug.

Remember when she said to herself: stop, stop!
When I realised I couldn't dance any more, I couldn't stand up. And I thought: if I can't move, I can't express myself….

Do you still like knitting?
Yes, I'm trying to make a hat. But, alas, it doesn't look like a hat (laughs). Maybe I'll 'convert' it into a strange toy… I'm distracted when I knit, because at the same time I'm listening to something or watching a film. When I look down, I see that I've made a long gut that doesn't match anything, and I have to throw it all away. She would be offended if I gave her something I made (laughs)!