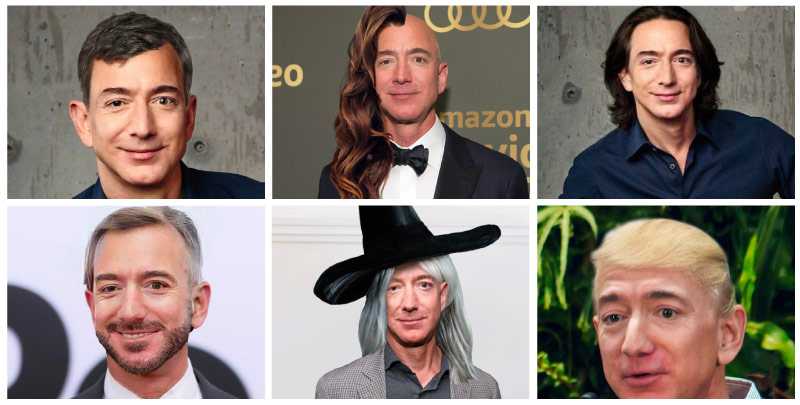 Why doesn't Jeff Bezos get a hair transplant like Elon Musk with all the money he has?

Why should he do it? Is baldness a condition to be ashamed of? 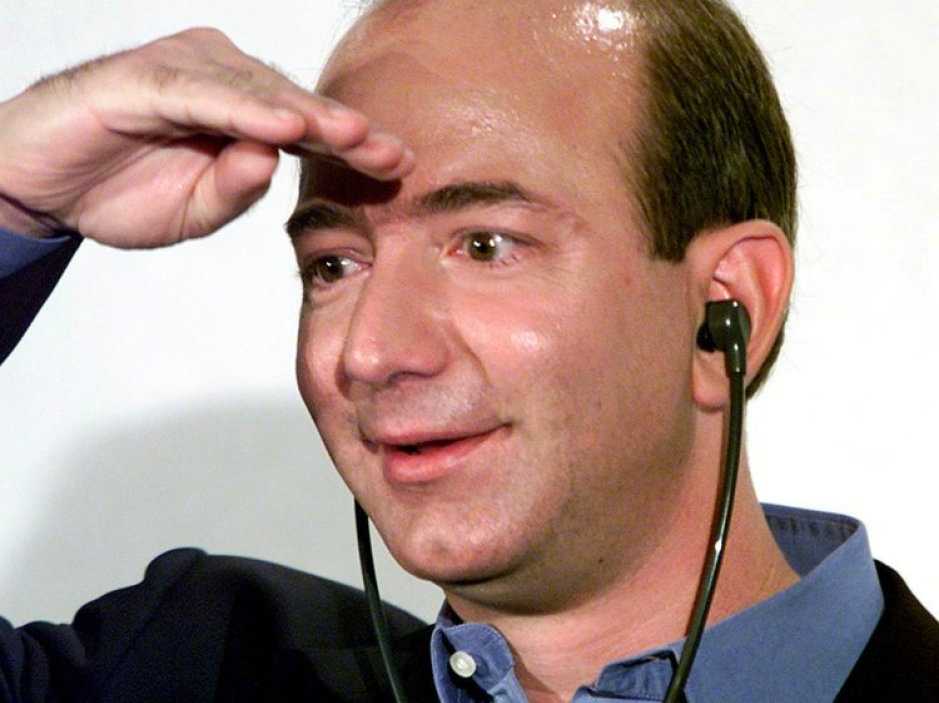 The evolution of Jeff Bezos' style

While many of us were cooped up indoors, between positive tampons and strategic quarantines, Jeff Bezos was celebrating New Year's Eve in St. Barth with a crazy disco party with partner Lauren Sánchez and a small group of friends.

How do we know? Thanks to this photo posted on Instagram on 1 January and immediately going viral.

What struck us was not the optimism with which they celebrated the arrival of the new year – why should Bezos fear this 2022? According to the British foundation Oxfam, the founder of Amazon has earned over $81 billion during the pandemic – the question we all asked ourselves was "What does Jeff Bezos look like?". 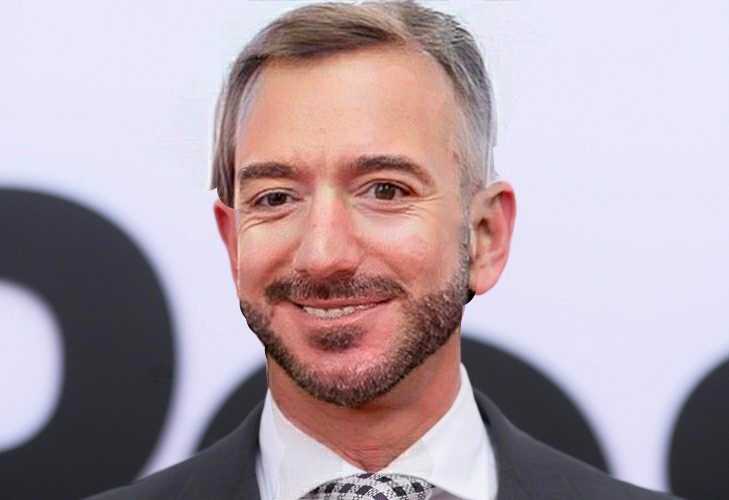 Silk shirt by the French brand Casablanca, ultra-fitted white jeans by Brunello Cucinelli (call me romantic, but I want to read an homage to Gianluca Vacchi into it) and heart-shaped glasses to remind us that this is a theme party. 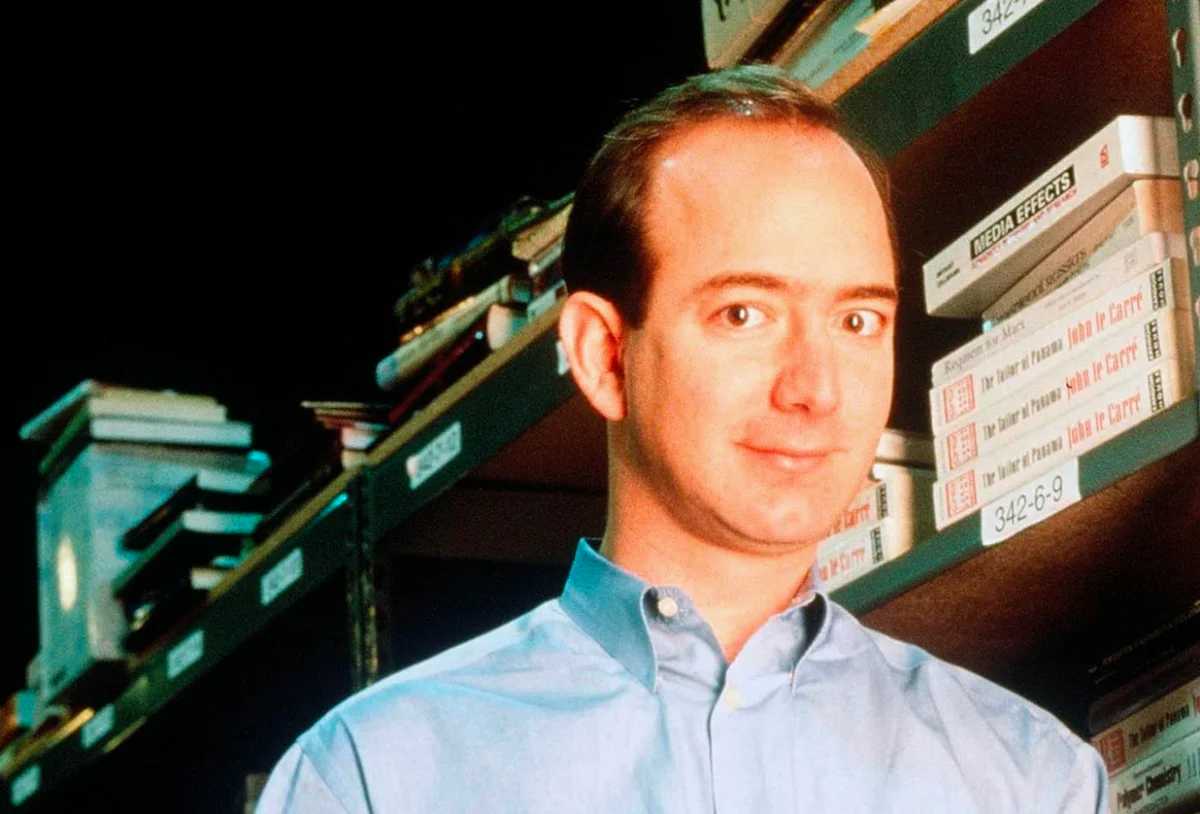 There's nothing wrong with the luxury brands used for this masterpiece, it's the skimpy fit that makes its way into our nightmares: it's true that Casablanca makes crazy shirts, but they're usually worn by people like Jaden Smith and in size XL. Brunello Cucinelli is the brand of the real rich people and the ones who have been portrayed on the small screen (in the last few years alone he has been mentioned and worn in 'And Just Like That' and 'Succession'), but none of them would ever dream of slipping into trousers that look like they have been painted on.

But when did Jeff Bezos start dressing like the mega tamarind villain from an episode of Fast & Furious? Since Alexa doesn't answer, let's try to figure it out by reconstructing the evolution of his style. 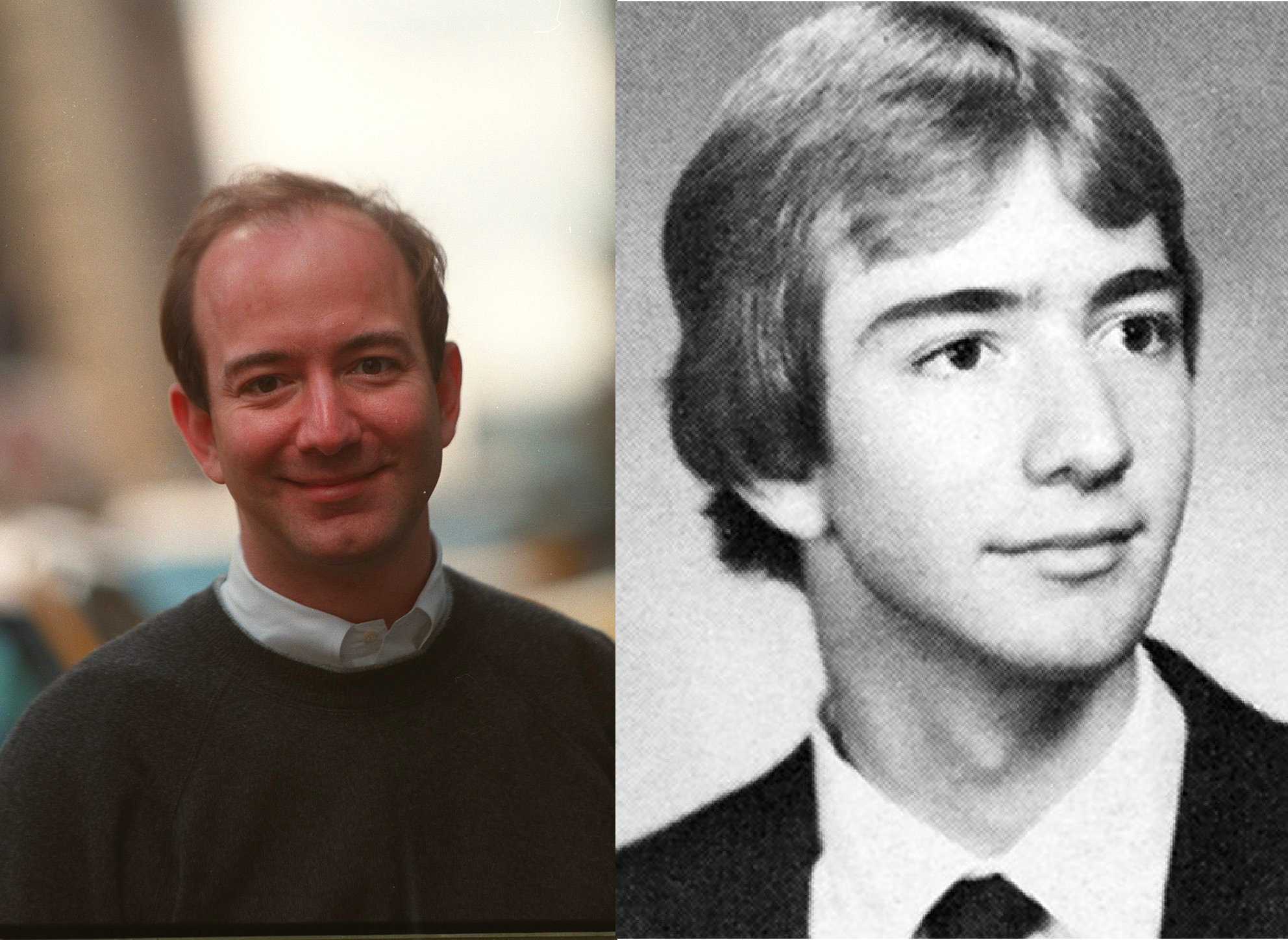 In 1999, he was named Person of the Year by Time, the prestigious magazine celebrating him with a cover that today – more than 20 years later – would find a place in the museum of disturbing portraits.

His big oval face emerges from a cardboard box amidst Styrofoam confetti, two books and a mouse. He has a smiling expression, but thanks to excellent lighting work the image takes on a sinister and disturbing air. In 1999, 35-year-old Jeff Bezos is worth 10 billion and drives an ordinary Honda. To the CBS reporter who asks for clarification, he replies "It's a perfectly good car".

It is not that Jeff Bezos has bad taste, he simply does not have time to develop a good one.

Originally, Amazon only sold books and in fact Bezos dressed like a perfect bookseller: photos from the period show him wearing loose-fitting blue shirts and khaki trousers in perfect sitcom dad style. Depending on the occasion he would add a black blazer or a shapely jumper.

Come to think of it, Jeff Bezos' normcore style inspired a multitude of chicks in oversized blazers and beige trousers that appear on my Instagram feed today. 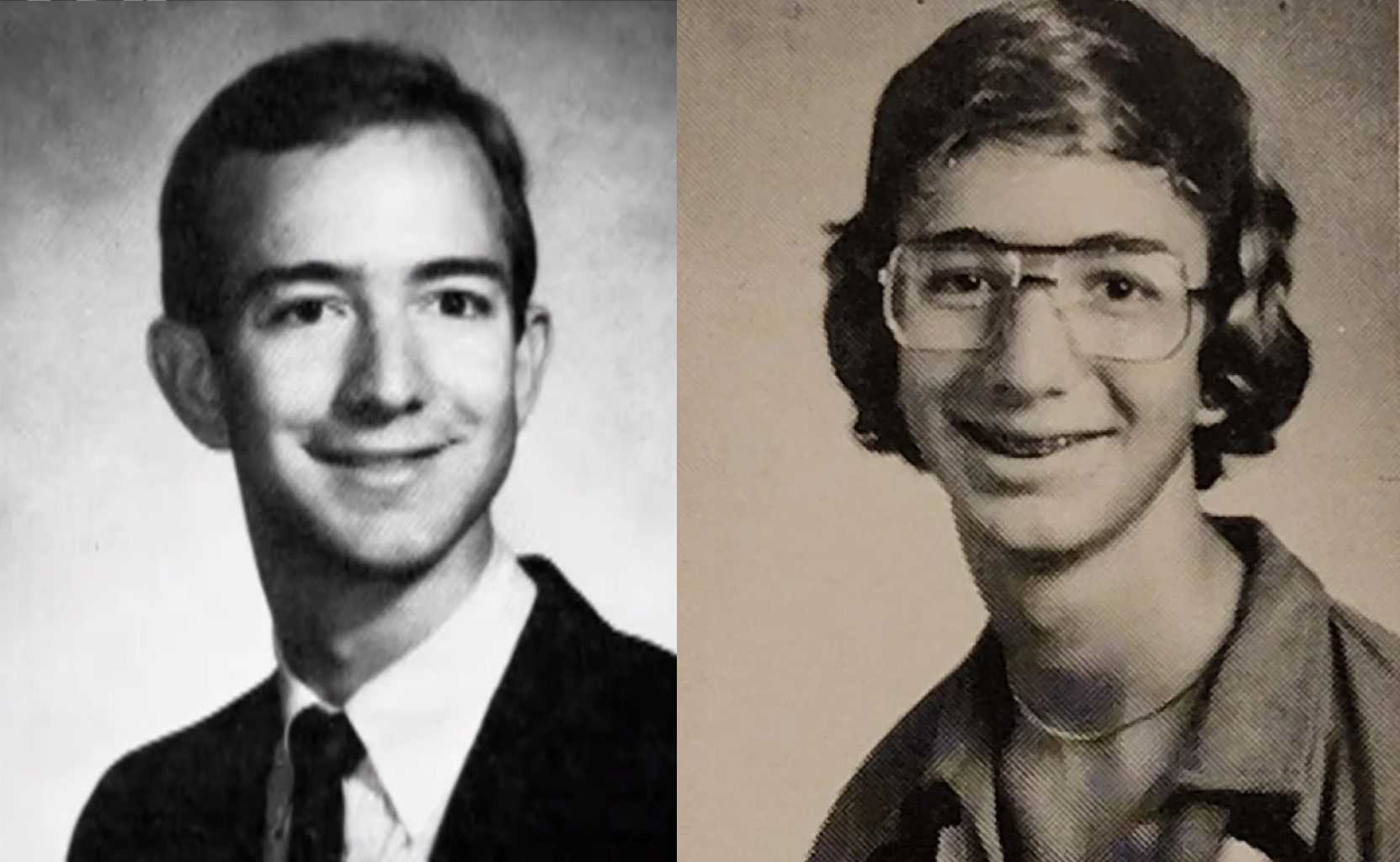 At the height of the 2000s, his look varies slightly: the holy trinity of blazer/blue shirt/khaki trousers is not replaced, but the fit goes down a few sizes, as if the clothes began to be more body conscious. More willing to be close to the man – but what am I saying – to the legend.

Then 2008 arrives, the first 'Iron Man' film is released in cinemas. The world meets Tony Stark for the first time, the arrogant tycoon who wears tight suits, ties and a set of unforgettable coloured sunglasses. Now, our Jeff may not boast the charisma or the jawline of Robert Downey Jr., but he can't resist the urge to identify with a character that resonates so familiarly with him: a visionary genius capable of making anyone who meets him uncomfortable. In addition to the physical change (he shaves his hair and works out constantly), he steals a few items from the Marvel character's wardrobe: aviator glasses, leather jackets and ultra-tight polo shirts that wrap around his growing biceps begin to appear in his looks.

On the other hand, even the nerdiest Avengers have undergone a distinct physical transformation, have begun to look at Thor and Captain America with envy and – between the destruction of New York City and an intergalactic journey – have decided to transform their natural bodies. 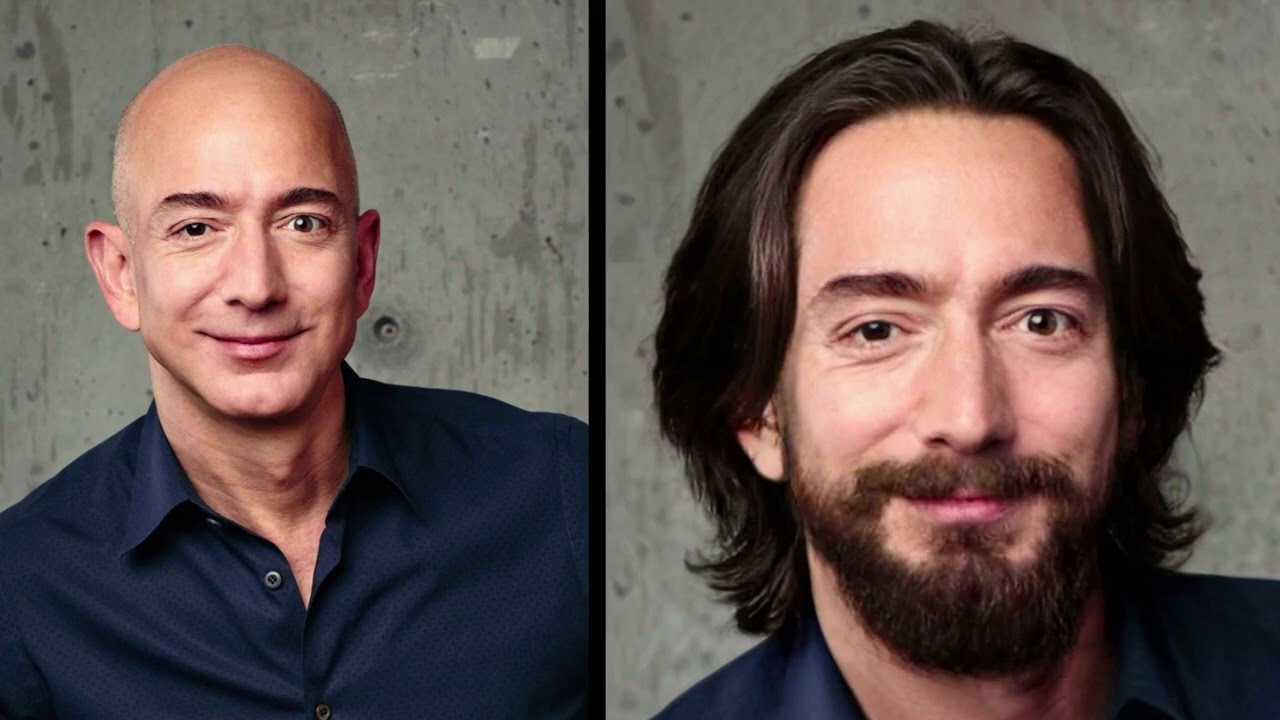 It's not Bruce Banner who needs a back the size of an Ikea Pax wardrobe, but his pissed-off alter ego the Hulk, yet in the 2019 chapter 'Endgame' the two coexist in the same person. And what a person! A tamed Hulk – complete with a perfect Bobo Vieri shave – sporting a grey V-neck T-shirt and a fitted cashmere cardigan.

Every sapiosexual's dream. Forgive me. The men of my generation found the character played by Megan Fox in "Transformers" (a comely teenager with an unbridled passion for motors, but really?) believable, so let me fantasise about this ideal husband who has the face of Mark Ruffalo, the brains of the brilliant Dr. Banner, the body of Francesco Chiofalo and the style of Claudio Marchisio.

Even in the first scenes of 'Doctor Strange in the Multiverse of Madness', the director immediately focuses on a big bed where the little doctor sleeps shirtless. Between the wavy toupee, the smooth chest and the jacquard sheets, I thought the multiverse madness so much sponsored in the title was the possibility of a crossover with the iconic soap Beautiful. 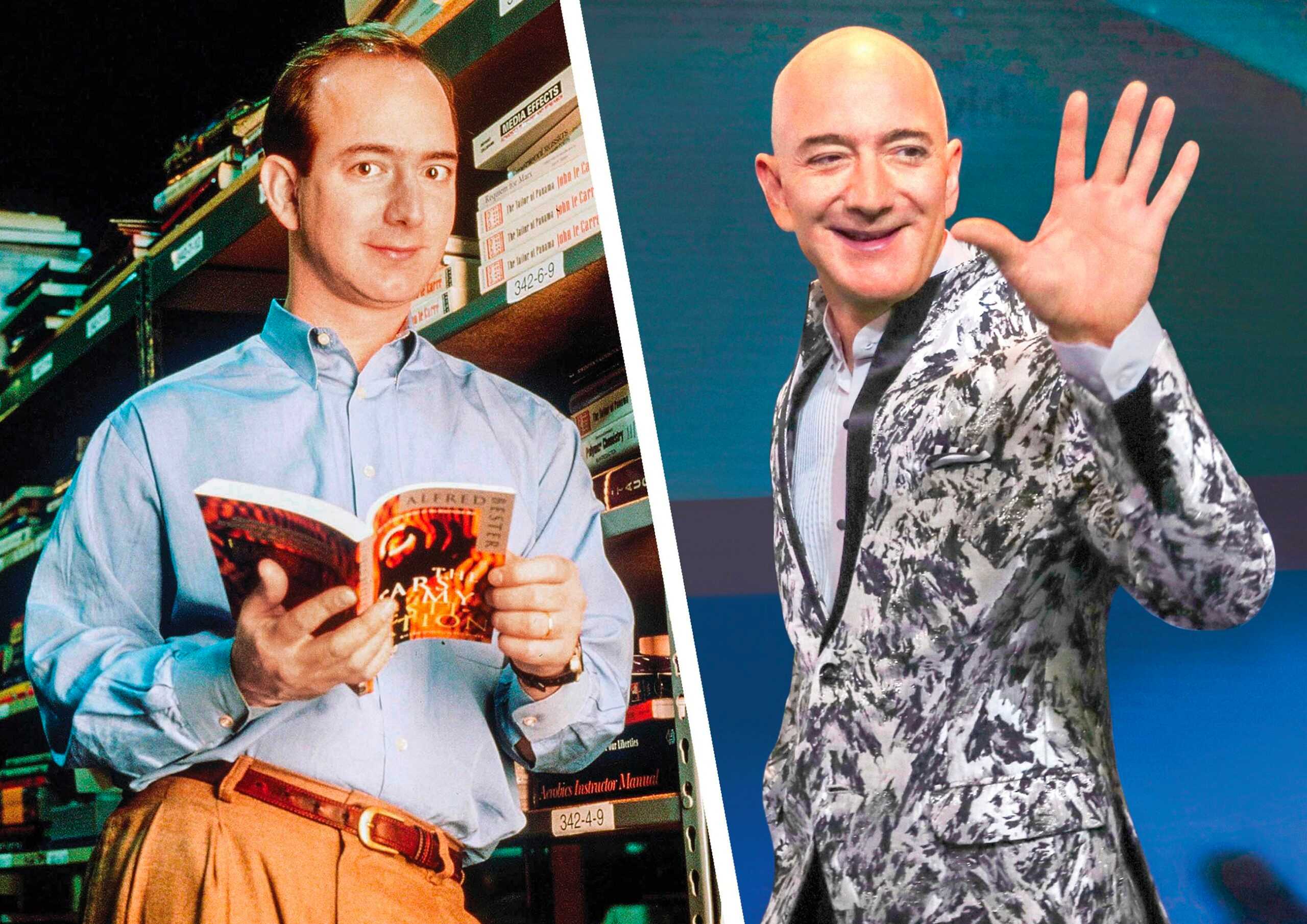 Jeff Bezos is not the only mogul to take part in this mirror game between reality and Marvel movies, just look for the before and afters of Pinterest co-founder Paul Sciarra, Mark Zuckerberg or our own Salvatore Aranzulla. These genius entrepreneurs have the time and resources to achieve their ideal of beauty, just like the Kardashians.

But back to our (former) CEO, entrepreneur, born in 1964 as Bo Burnham sings in his Netflix special 'Inside'.

Around the turn of the decade, even the gala look is adjusted and it is no coincidence: aiming for the launch of Amazon Fashion in 2012, Jeff Bezos begins to take his first steps into the exclusive world of fashion. He took on the role of honorary co-chair at the 2012 Met Gala, which he attended wearing a Tom Ford suit.

In 2013, obsessed with the idea of being credible in the eyes of investors and brands, he declared to Vogue that he chose the clothes for his wife. A bit like Kanye West did with Kim Kardashian, but with decidedly different results.

But there is still a place that fashion has only imagined: space. The various Courrèges, Paco Rabanne, Hussein Chalayan have only fantasised about space, but never shot into the sky. Bezos has.

The infamous hat also returns in 2021 when, returning from his first flight into space with his brother Mark and two other lucky companions, he matches it with the blue astronaut suit.
Impossible not to see more: sitting on his rocket, Bezos is a modern-day cowboy ready to conquer the sky.

In fact, to the comparison with Tony Stark, first suggested in 2018 by Vanessa Friedman, fashion editor of the NY Times, some users respond by likening him more to Lex Luthor. Putting aside the physical resemblance to the Superman super villain, it is undeniable that Bezos' personal style and aggressive communication lead us to place him in the villain group.

When you see him inaugurate the top of a windmill by smashing a bottle of champagne or when you realise that he has just launched a penis-shaped rocket like Dr Evil did in the second Austin Powers movie, in short, you can hardly root for him.

We love Amazon's fast and efficient service, but we can't help but hate Jeff Bezos, but why? While the other tech gurus reject the formal suit and adopt alternative uniforms (Mark Zuckerberg's grey sweatshirt, Elon Musk's velvet suits, Steve Jobs' iconic black polo neck), the former Amazon CEO agrees to play the villain even as he refuses to submit to this unwritten law of no-logo style.

While everyone else opts for invisible luxury (Mr. Facebook's sweatshirts are certainly not by GAP, they too bear the signature of Brunello Cucinelli), Jeff Bezos demands to be looked at. Packages that travel from one point to another of the globe, tourist flights in space, laboratories that in his name study the recipe for eternal life… His evil empire is increasingly boundless, but in this game of perspectives his person always remains in focus. Jeff Bezos does not want to blend in among the others, he does not pretend to be the man on the cover of Time, he does not take sides with anonymity. This tells us about his style today: like a modern-day Nike of Samothrace, it is the wind that sticks his clothes against his body, as if Jeff Bezos were the only man in the world in constant motion.