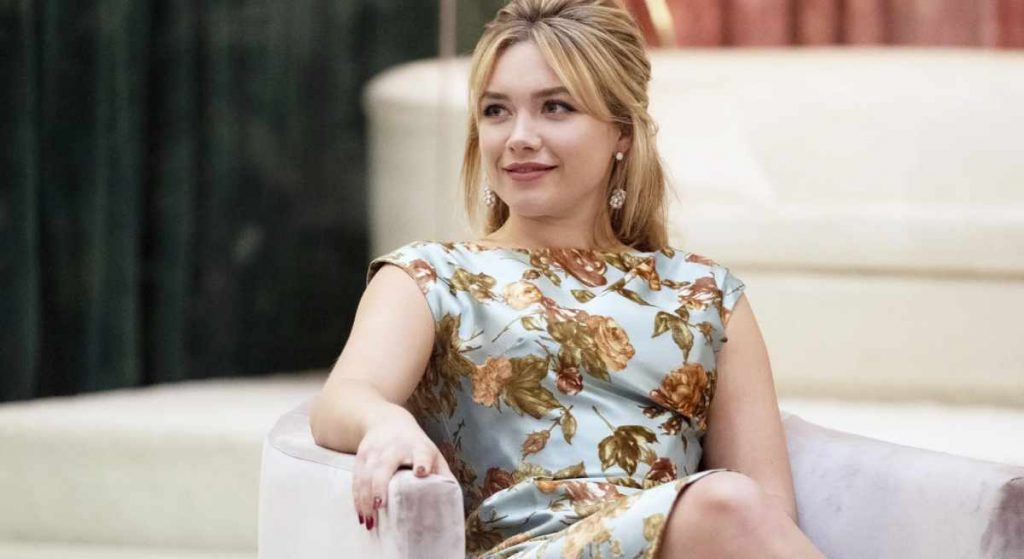 In an idyllic community called Victory, a housewife (Florence Pugh) finds her life turned upside down by a revelation. Don't Worry Darling, Olivia Wilde's new feature film, is set in a fantasy town frozen in the 1950s and 60s. Costume designer Arianne Phillips tells us about the work behind the film's gorgeous costumes.

What were the early creative discussions with Olivia Wilde like? Did she have a specific vision of the film's world or did she give you free rein?
I was a big fan of her work as an actress and of her first film, Booksmart. When I read the script for Don't Worry Darling, I discovered, to my surprise, that it was a very different world from her previous film. Even before we met, she sent me a very impressive moodboard. We have the same artistic sensibility and similar references: the photographers Slim Aarons and the contemporary artist Alex Prager. It's always good to have period shots, but also to refer to artists with a singular universe.

The film gives a very idealized vision of the 50s and 60s. How did your approach differ from a traditional historical feature film?
I've worked on a lot of period films, from Walk the Line to Once Upon a Time… in Hollywood to A Single Man. Geographically too, it's very different from my previous projects: the plot takes place in the utopian town of Victory, a fictional world set in a real universe. The time frame of Don't Worry Darling is also more ambiguous. Bunny, Olivia Wilde's character, is dressed in a 1950s spirit. This reflects the perfect world she and her family have built for themselves in this community. Alice's costumes are more modern and more reminiscent of the 1960s. The audience discovers the city for the first time through her eyes, everything seems new.

Did you opt for period objects or custom-made costumes?
It was a combination of both, because there were a lot of actors to dress in this film. I usually start by doing research to understand what silhouettes and colors were popular at the time. Then I focus on the fabrics. It was October 2020, in the middle of Covid, so many vintage stores and flea markets were closed.

The character of Alice is in the throes of an awakening in the film. How did you convey this awakening through the costumes?
The patterns of the clothing provide context. In the opening scene, Alice wears a dress with prints that match her energy perfectly. Costumes should emphasize an atmosphere and a tone. If you mute the sound, they are enough to understand the characters. Olivia also wanted colors with a flamboyant hyperrealism, like in the pictures of Slim Aarons, Alex Prager or Martin Parr. These were very exaggerated colors, but they were not popular at the time. Some elements may seem incongruous, but it is a way to make the audience uncomfortable. Everything makes more sense on second viewing.

What about the male characters, whose costumes are more formal?
We are in post-war America, with this idea of perfection, hope and a new beginning. The male characters live in this fantasy of the Rat Pack -a group led by Frank Sinatra, Sammy Davis Jr. and Dean Martin in the 50s to 60s- that we found more recently in the series Mad Men. Women, on the other hand, exist only through the male gaze. They are only there to be devoted wives and mothers. When we made Don't Worry Darling, we were in that post-Me Too era of free speech in Hollywood. And two years later, women's health and freedom are under threat again. I never thought abortion rights would ever be revoked in the United States. Here we are in 2022, fighting for our lives and those of future generations. This gives the film a whole new resonance. It's entertaining, but it touches on important themes like patriarchy, reactionary culture and religious fundamentalism.

What was the biggest challenge for this film?
This was the first post-confinement project I worked on. I was very excited to have a goal, to not spend my days on Zoom or at home. I'm doing the only job in film that is saying, "Nice to meet you, now take off your clothes." I have to build a relationship of intimacy and trust with the actors. On set, we all wore masks and visors over our faces. It was hard to bond in that environment, but oddly enough, the Zoom chats with Harry Styles or Chris Pine were a big help. The actors were comfortable at home in their sweatpants, which helped put them at ease before the fittings. It's a tool that I will continue to use.