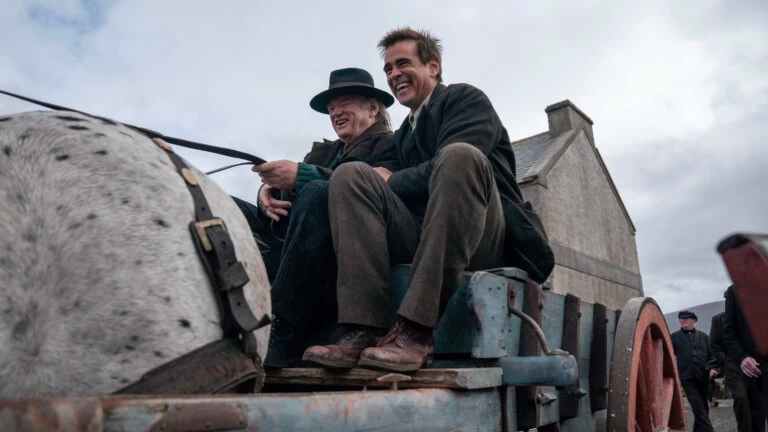 He has been through everything in life. Perhaps that is precisely why he shuns interviews. In this (rare) one, the actor, whose character of a simple but warlike man won the coppa Volpi, the Golden Globes on 10 January and is now aiming for an Oscar, talks about how those experiences have made him the man he is. Capable of great emotion. Starting with the breakfast menu.

'Bread and milk! I tell no lies. Bread and milk!" Colin Farrell's excitement at the thought of the breakfast he used to have on the set of The Spirits of the Island (winner of three awards at the last Golden Globes) recalls the childlike grace of his character, Pádraic Súilleabháin, a man who, in the 1920s, on the imaginary island of Inershin, has only two certainties, the pint waiting for him at the pub at two o'clock in the afternoon after work on the pasture.

And the fact that she will drink it with her lifelong friend, Colm Doherty (played by Brendan Gleeson). The film, which will be in cinemas from 2 February, along with the commotion over the catering, brought the Dubliner actor the coppa Volpi at the last Venice Film Festival, and from there a string of other awards that are cleverly paving his path to the Oscar.

For the man with the 'emotional eyebrows', who hardly ever gives interviews to the newspapers (they always end up reminiscing about a past with more than one false movement, online dissemination of a sex tape, rehab for alcohol and drug rehab), returning home to Ireland, using his accent ('playing Americans is fun, but there's no place like home'), working with the same director, Martin McDonagh and the same colleague with whom he shot In Bruges in 2008, was like lining up a collection of madeleines.

"Coming home is always a profound experience, more so as time goes by. And this time, for me, there were no barriers, no places where I could hide. Every time I learn something and maybe this time I realised that you cannot live in the past, because you have to play for the future, but being clear about where you come from. For me now it is clear where I come from, the three months of shooting the film were a revelation: I recognised the sound of the night breeze, the stillness interrupted only by the bleating of animals in the fields. In a place like that in a second you appropriate a hundred years of life. You don't get that feeling in Dublin. Certainly not in Los Angeles. There's always a time machine that kicks in when you're playing a costume film, but this was a very particular time machine for me. It coincided with an extraordinary simplification of existence. I used to cycle from the set to the cottage where I lived, the flavours of the food took me back to my childhood. And 99 per cent of me would say, 'Oh God, this is wonderful'".

The remaining 1 per cent is what Farrell elaborated during a recent public meeting in America with Jamie Lee Curtis on the art of acting: 'The only two certainties I have are that we are going to die and that we are going to make serious mistakes'. Curtis, who evidently knows what he's talking about, replies: 'Did you know that before you got sober?' Farrell: "No. I had suspicions, before I got sober, of how painful life could be. Now, sometimes, I give life great importance. And other times, I am as frivolous as I was when I was six years old on a good day'.

Farrell, whether serious (as in this film) or frivolous (as in the many big films he has starred in, we will soon see him again in the TV series in which he plays the Penguin, Batman's enemy), never ceases to seduce us. He has now lived in California for many years, the centre of modernity and calorie counting, where bread and milk are probably not an option: 'I don't think I would have stayed there if I didn't have two sons, James 18, Henry 12. If it wasn't for them, growing up there, I think America would have only kept me there for a few years and then I would have come home. But I am not unhappy. There is so much love for me in Los Angeles because of my children and my family. But I know that when I'm out in the world and I say, 'I'm going home now,' for practical reasons I mean Los Angeles. But then when I am there and I talk about 'home' I think of Ireland. And that 'home' I pronounce it two octaves lower. Much, much deeper".

The Spirits of the Island is more than a baritone version of homecoming, it is a rather accurate study of the masculine. The friendship between Pádraic and Colm could have gone on until the end of time between pints and chats, if Martin McDonagh – who had declared that he did not want anyone else to reunite 'his' two actors before him at any cost – had not decided that a break-up was inevitable: Pádraic is a simple man, Colm makes music and is capable of elementary philosophical thoughts. So he decides that immortality is not to be played out among cows and donkeys, but by delivering something beautiful and harmonious to the world. And to do this he has to end it with Pádraic. The communication is brutal: 'I don't like you any more'. It takes little to trigger a war, even in peaceful people, even in an Eden without paved roads. Especially if the echoes of battle come from the nearby coast: the Irish Civil War, another fratricidal conflict.

Sometimes the only wise decision to make is to leave Eden, to depart. It is no coincidence that it is the film's only female character, Pádraic's sister Siobhan (the talented Kerry Condon), who does so. "Everyone has to pay a price for the decisions they make, including Siobhan," Farrell explains. "I don't know what hers is, maybe happiness, maybe loneliness, certainly her future will be in the absence of war, and that is rightly a woman's prerogative. There have been days when I have felt deeply sad. I am convinced that every time you shed a tear in a scene you take it to a place that is your own, a personal reservoir of tears that you have nurtured in your life, with your actions, encounters, breakups, sorrows. These are tears that have to come out at some point. There were days when it was hard, we entered uncomfortable emotional zones, but in any case the end result was always joy. Because we were swimming in the waters of the meaning of life, it doesn't happen often".

Have you ever decided to break up with someone because you felt it was time for your life to take another direction? we ask. "Is this a good time to take a break and go to the bathroom?" (laughs). "The first breaks I had in life were a shock. I asked myself, "Why does it have to be so brutal, when I still love this person?" I remember myself on my knees begging, "Please let me go," and doing everything to make sure that what was happening was not a cruel tear. It takes courage to realise that a relationship is over. And to do – with grace if possible – what is necessary'.