EmergeSocial.net News Angelina Jolie: ‘All together, we are stronger’

Angelina Jolie: ‘All together, we are stronger’ 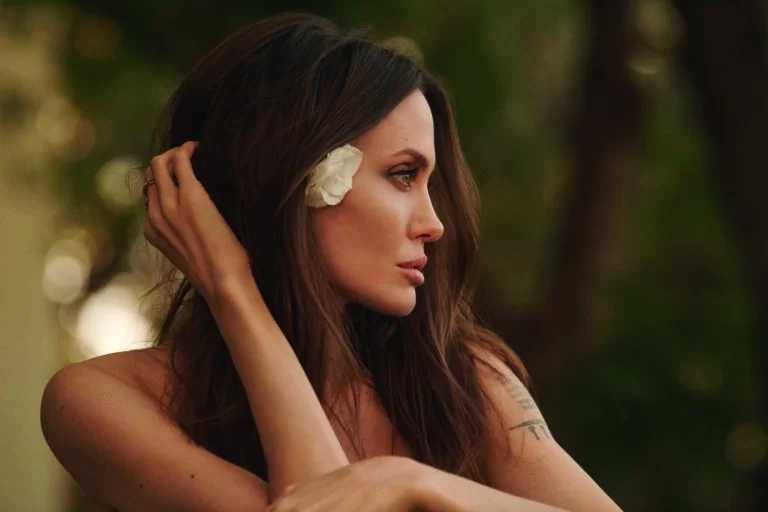 The cinema is not enough for her. A conscience agitator and UN ambassador, she reviews the hierarchy of her priorities and chooses her missions carefully, with a focus on female entrepreneurship and ecology. And she teaches her children respect and mutual support.

A United Nations ambassador, the star is passionately dedicated to humanitarian missions. A muse for Guerlain, she is also patroness of Women for Bees, a programme that promotes women and biodiversity. A passionate activist, she takes stock of her ecological commitment with us. Our reluctance towards the tedious practice of Zoom is alleviated when the miraculous appearance of Angelina Jolie, sunny face, Californian smile and black top with thin straps, on the rectangular screen of her old computer takes effect.

The actress is in Los Angeles and, in order to reduce her ecological footprint, she no longer grinds unnecessary kilometres except for strategic trips, such as her visit to Ukraine in early May as a UN emissary: 'I could see with my own eyes the absolute resilience and unimaginable strength of these people, who not only survive the war situation, but also defend those around them,' she says.

For a long time, the cinema has not been enough to fill the life of Angelina Jolie, Hollywood star and director, 47 years old on 4 June, who devotes most of her time to civil rights activism, an extraordinary personality who seems to have chosen a humanitarian priesthood that takes her relentlessly to war zones. Angelina Jolie intrigues, fascinates, perhaps confuses, but no one can doubt the sincerity and consistency of her commitment as a woman in the field who inspects refugee camps, speaks at Davos or appeals to international institutions.

A stirrer of consciences, she is also an ambassador for Guerlain, which has made her the godmother of Women for Bees, a pioneering programme on women's agricultural entrepreneurship, which trains and supports women beekeepers around the world. At the centre is biodiversity, of course, but above all the autonomy of women in disadvantaged regions: beehives have been set up in Cambodia, her country of the heart, where she partly resides, the headquarters of the Maddox Jolie-Pitt Foundation, which also works to preserve the environment and improve the living conditions of rural communities.

A question of inequality, an eternal problem. In general, as soon as a conflict breaks out somewhere, they are the first to suffer. In many parts of the world, women have neither the support nor the freedoms they should enjoy. There is a clear need to put this problem on the table, but there is also, perhaps, a more subtle way to remedy it, by introducing them to the mechanisms that underpin Women for Bees, the implementation of which can, in turn, benefit all their communities. For example – and I see this in poor countries – teaching them trade or exchange skills will make them more autonomous, helping them to create their own networks. Women are fragile, but paradoxically they are also a source of extraordinary strength. You see, at the beginning of the pandemic, 70 per cent of the caregivers were women… 70 per cent! This is the reality, and it is a good thing: when women have access to knowledge, tools and opportunities, what do they do? They help others.

How would you describe the word sisterhood?

Cambodia is her heartland. What is the condition of women there?

I have been working in Cambodia for about 20 years and our foundation reaches about 20,000 people, giving them access to clinics and schools. We also fight against deforestation. I say 'we' because, while I am the creator of the programme, today it is run locally. It is the population that does the work successfully. Young or old women, forestry workers, work side by side with men of goodwill. It is imperative not only to help women, but also to strengthen the bond with men. To improve collaboration, we must unite.

Do you think boys should be educated differently so that women can fulfil themselves better?

I am an advocate of the 'all together' principle. There is a growing need for boys to be aware of equality issues in countries or cultures that have gaps in this regard. It is absurd that even today, in some parts of the world, women are cruelly deprived of education and freedom.

But the question of education arises beyond any geographical or cultural connotation, it arises in all communities and families, in your home as well as in mine. For example, I have three boys and three girls, and every day I discover new aspects in each of them. The idea is for each one to find his or her place regardless of gender and to fulfil it fairly without hindering the freedom of the other.

You live part of the year in Cambodia, having acquired its nationality. How did this choice come about?

None of my six children were born in the United States. My twins were born in France, my daughter is Ethiopian, my sons are Vietnamese and Cambodian, while Shiloh was born in Namibia. My heart is attached to several countries, particularly those of my children's birth and descent. But I must say that Cambodia was the first country with which I established such a strong bond. I lived there and really got to know its people. It was also there that I became aware of the refugee problem. In my childhood, there was little talk about displaced populations and I don't remember history lessons leaving much space for this topic. When I visited Cambodia for the first time in 2000, I knew nothing about the country and was struck by the extent of my gaps. It was a profound realisation to understand what had really happened during the conflict and then to go and meet the refugees. You see, the place where I had my house built was a Khmer Rouge stronghold. It was a bunker and the ground was littered with mines. All of this was a far cry from what I had been taught during my youth in America, experiencing it was both a refreshing and a questioning of things for me. I love the people of Cambodia with all my heart. It was my son Maddox, my eldest son, who made me a mother. I have said it all.

Your political commitment is accompanied by a very strong connection with nature. What do you draw from it?

In the midst of nature I feel at peace. I feel wild and very human at the same time. I often have to see how everything that does not come from nature is what leads us astray.

How did your ecological awareness come about?

I did not grow up in a particularly ecological environment, although my mother was aware of some of the problems: she often mentioned the endangered virgin forests, for example, a topic that is still topical, alas. My ecological consciousness was really consolidated during my first trips to Cambodia. In the beginning, I mainly thought about human needs, which for me meant schools and hospitals. As I said, I bought some land, cleared it and built my headquarters there. Of course it was good to de-minify and build schools, but this also meant cutting down trees and removing tigers from their natural environment. It was at that moment that I realised that we had to think differently, in a more global way. Understand that any action can have a devastating effect on the environment. Then act accordingly. Trying to reconcile all communities, poachers and foresters, those who protect the forest and those who build hospitals. Pedagogical interventions require constant adjustments, but I am convinced that nature and humans can work well if they are in tune.

Do you raise your children with this idea in mind?

I think the new generations are much more aware and careful than we were at the same age. Of course, it is easy to get anxious about the future when you see the inadequacy of laws or the slowness of politicians to make things change. For my part, I do my best to educate young people with a global perspective, including the environment. On this topic, I have also co-authored a book (Know Your Rights and Claim Them. A Guide for Youth – Know Your Rights and Claim Them. A Guide for Youth, ed.) which deals with the rights of children and young people. As for my children, I preferred not to repeat all the time why it is important to think about the environment. I let them make up their own minds as they grew up, immersing them in different environments, encouraging them to make friends with people from different cultures, in short to live and experience as many emotions and experiences as possible. I believe that for them understanding, respect and openness towards others became almost natural concepts.

What are the daily ecological gestures in the family?

You see, my main concern is human rights and refugee rights. I do not pretend to be an example of perfection when it comes to domestic ecology, although I strive to improve. Before, for example, I used to fly a lot and I liked it. Now that's enough. I only do purposeful flying, i.e. necessary and useful, for good reasons.

How can we define you? Environmentalist? Humanist?

Humanist, certainly, but above all internationalist. I believe that the whole world must unite in the name of greater respect and mutual support.